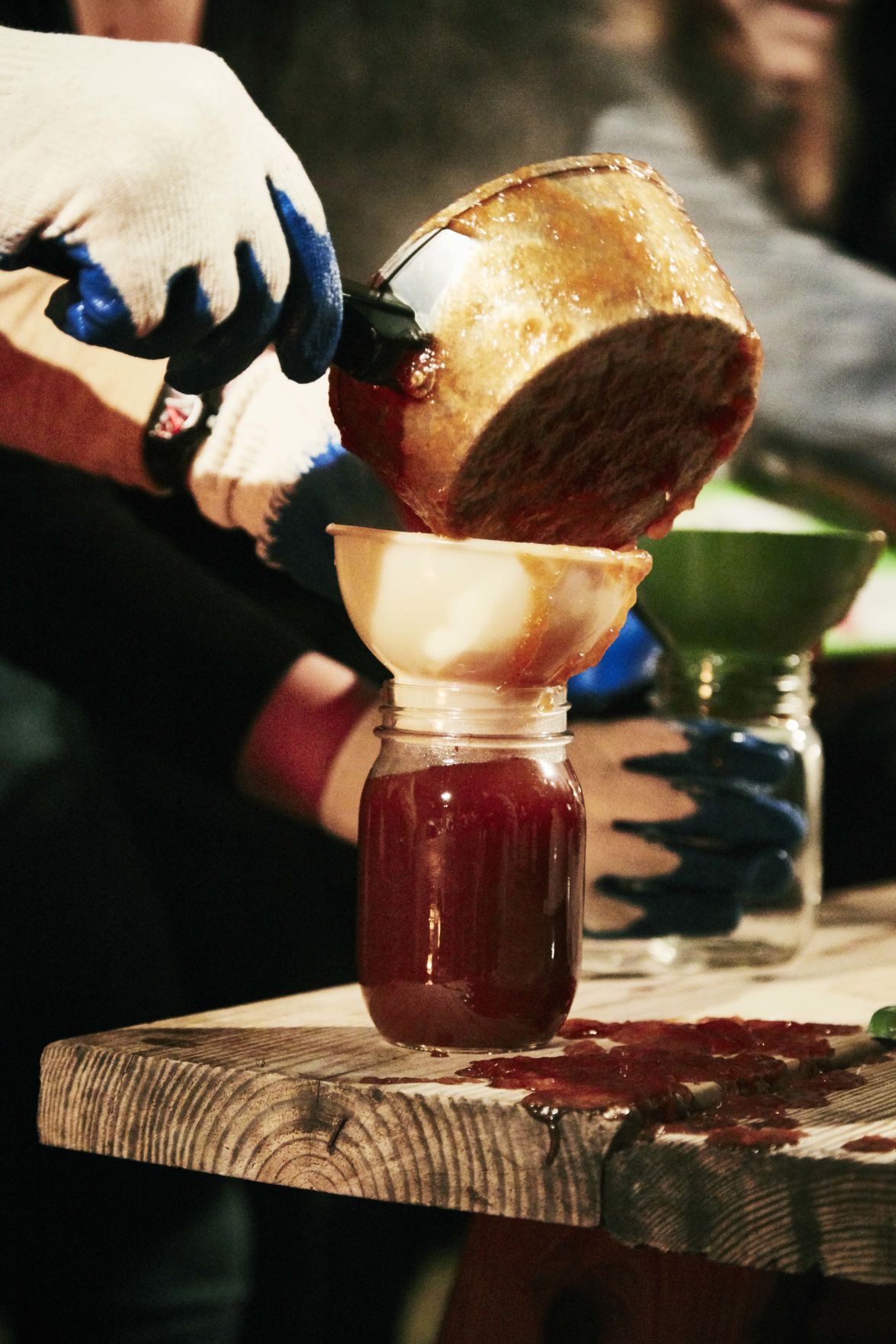 Hot apple butter is poured into jars for preserving. MUST CREDIT: Christina Holmes. 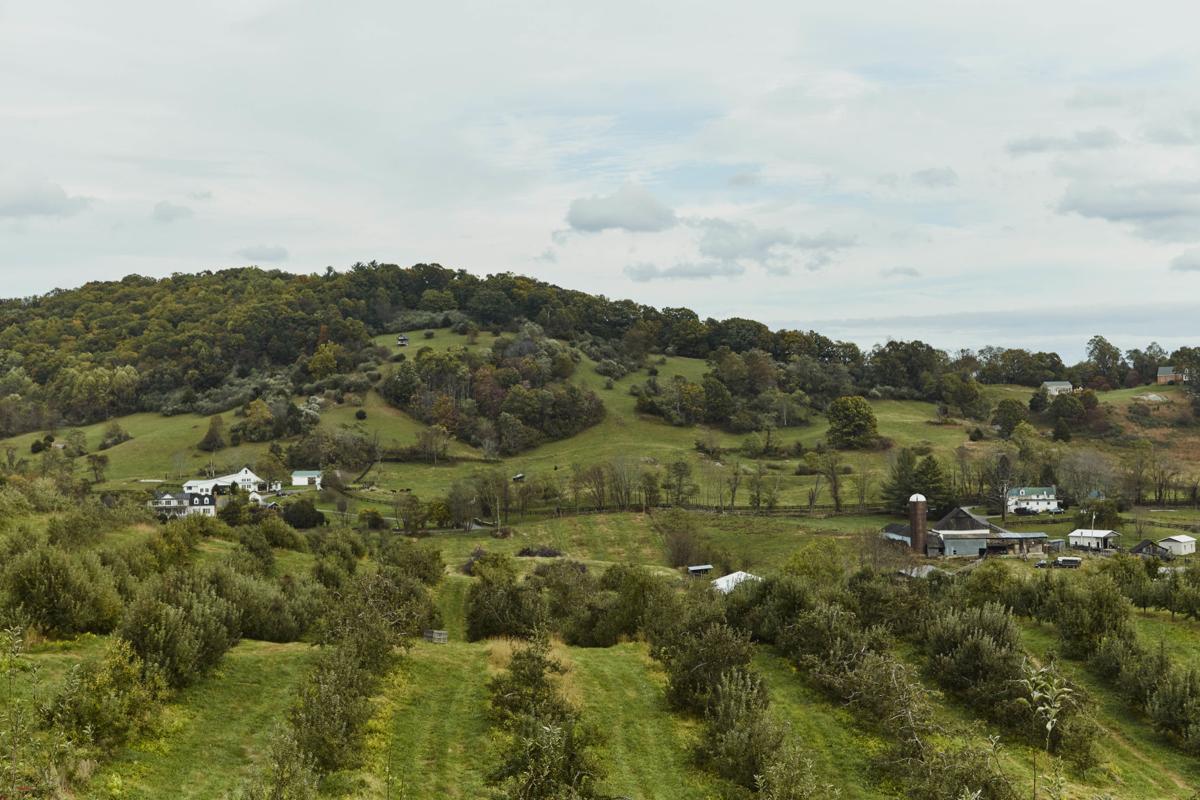 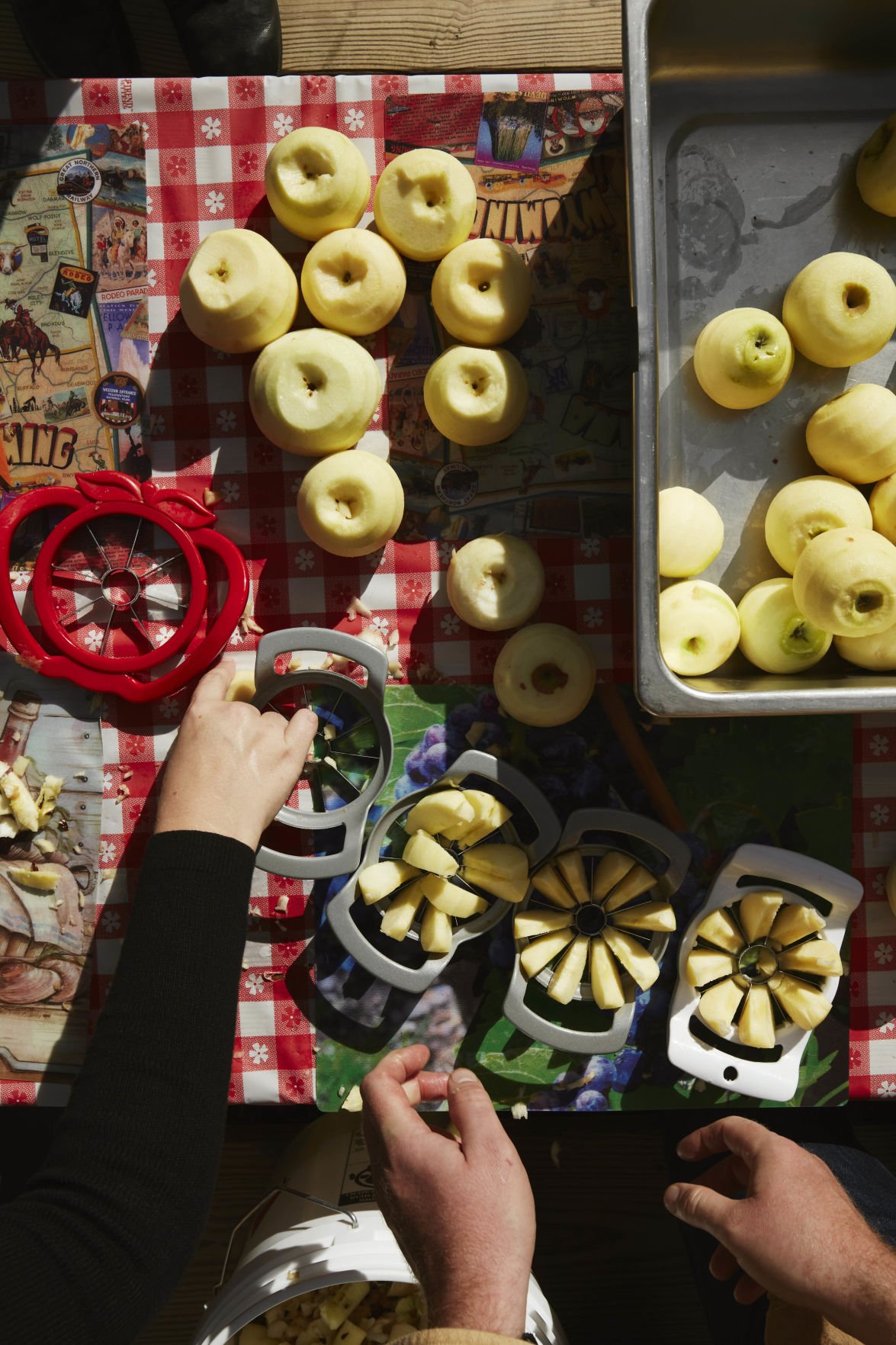 All hands are on deck to prep apples for making apple butter. MUST CREDIT: Christina Holmes. 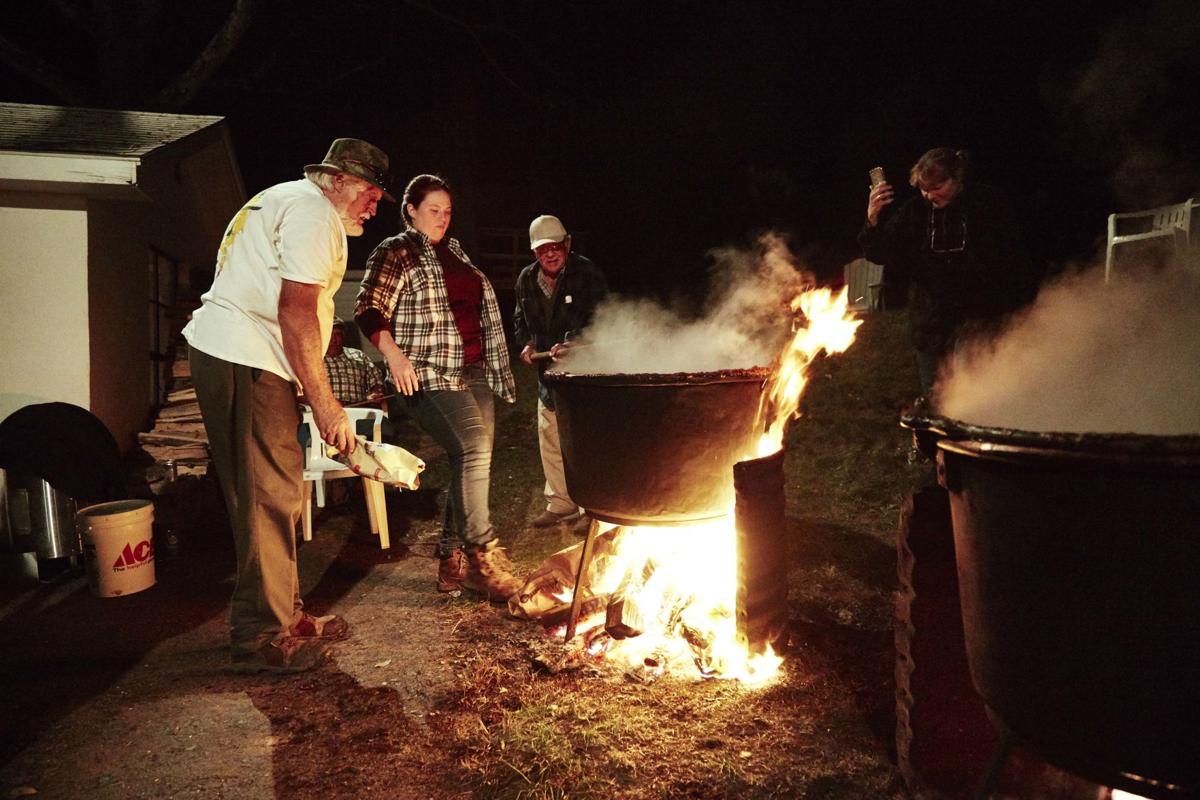 Linwood Burton, his niece Austin and other family members tend the fire during an apple butter-making party in 2017. MUST CREDIT: Christina Holmes.

Hot apple butter is poured into jars for preserving. MUST CREDIT: Christina Holmes.

All hands are on deck to prep apples for making apple butter. MUST CREDIT: Christina Holmes.

Linwood Burton, his niece Austin and other family members tend the fire during an apple butter-making party in 2017. MUST CREDIT: Christina Holmes.

BENTONVILLE, Va. - The crisp and sweet York apple is without a doubt the favorite in Warren County, Virginia. But you won't find any in Mary Digges's apple butter, and for good reason. Its distinct lopsided shape means it doesn't sit straight in the tabletop crank peeler. And when you're battling to skin 10 bushels (about 400 pounds) of apples in a few hours, a trusty peeler, and at least a dozen good friends, is the only path to victory.

The friends are gathered by the Turner family, who have thrown an annual apple-butter-making party here in Bentonville for some 40 years. Back in the day, children were not invited. The drinking started early and ended late. And it wasn't unusual to find the apple butter still cooking and needing to be jarred at 2 a.m.

Then 26 years ago, Digges, a stout woman with cheeks as ruddy as her beloved York, took charge of production. Now, the apple butter die-hards arrive by 11 a.m. and set up an assembly line at three picnic tables, covered in red-and-white-checked plastic tablecloths. Over the course of several hours of chitchat and a steady hum of country music, apples are peeled, cored and chopped into two-inch "snits," then dumped into white plastic buckets.

A few feet away, volunteers led by Digges's husband, Linwood Burton, keep the fire going and stir two copper kettles with a long wooden paddle, swirling the snits into the bubbling, swampy stew. In the rare moments when the tireless Burton is not stirring himself, he instructs a younger generation on technique: when to add the next batch of apples, how to make the "crazy 8" motion that keeps the apples from sticking to the bottom of the kettle. "Place the paddle against your hip and rock back and forth," he says. "It's like slow dancing." These days, when all goes well, 25 gallons of apple butter is ready by 9 p.m.

You might expect that the tradition of making apple butter - outdoors and by the vat - would have disappeared long ago. It's time-consuming, labor-intensive: the anti-everything of our American age. And if the zeitgeist were not strong enough to do in the custom, the popularity of the slow cooker - dump in apples, press a button and walk away - should have banished it for good.

And yet the annual apple-butter gatherings survive. Throughout Appalachia and much of the South, families congregate in their backyards to stock up for the season, while churches, schools and social clubs join forces to make apple butter for community fundraisers. There are even annual apple butter festivals, like the one in Berkeley Springs, West Virginia, which this year will celebrate its 45th anniversary.

"I remember being a kid and going through town and everything would smell like burnt molasses and cinnamon," says chef Travis Milton, who grew up in the mountains of southwest Virginia and is now culinary director and chef at Nicewonder Farm and Vineyards in Bristol, Virginia. "I assumed all that would be gone. But the culture is still vibrant."

As with most historic foodways, the tradition of making of apple butter began as a way to fill a need. Apples thrive in the mountains; perhaps counterintuitively, a slight elevation protects them from frost damage. Early settlers were keen to preserve the abundance. Fresh apples could be stored in a cold house or sliced and dried. But apple butter, with its concentrated sugars, was a powerful way to extend shelf life before refrigeration. Each fall, families would assemble to make fun of the hard work of putting up. "Apple butter making is like a hog killing used to be," said Eddie Williams, the proprietor of Williams Orchard in Flint Hill, Virginia. "It was a social event, but it was also productive."

At one time there were as many as 1,600 varieties of apples in southern and central Appalachia. Today, according to Slow Food's Renewing America's Food Traditions Alliance, more than 600 remain. There are Adam and Eves and Arkansas Blacks, Limbertwigs, Maiden's Blush, and Yorks. No wonder the alliance's founder, ethnobotanist Gary Paul Nabhan, has dubbed the region "Apple-achia."

Which apples are the best for apple butter depends on whom you ask. Milton likes Arkansas Blacks because they have a balance of starch and tart sweetness. Williams insists on a mix and recommends Yorks, Winesaps and Golden Delicious. The disagreement, says cookbook author and Appalachian historian Ronni Lundy, reflects the region's geography and its character. "One apple grew well on one part of a property, and another grew well on another, while the neighbors maybe grew different varieties entirely. It bred a kind of individualism," she says. "Your family had your apple and you liked it better than someone else's."

For Kendra Honaker's family in Bristol, the right apple for nearly a century has been the Stayman. That was the variety her great-grandparents grew in nearby Scott County. One year, when the two bushels of Staymans from the local orchard weren't up to snuff, Honaker's mother drove 85 miles to Asheville, North Carolina, to replace them. "It's serious business in our household," Honaker said with a laugh.

The family has not missed a year making apple butter since Honaker's great-grandmother, Nellie Mae Pullon, launched the tradition in the early 1920s. The clan gathers the day before to peel and chop; then the next morning, they build a fire in the backyard and start cooking. The Stayman rule is not the only one that is observed with reverence. The cooking vessel must be her great-grandfather Nelson's 10-gallon kettle. Lots of sugar - a contentious point with some aficionados - also is a must, as is a generous dose of cinnamon oil to cut the sweet. Each year, the family puts the same 1895 silver dollar in the bottom of the kettle because Nellie Mae insisted that it keeps the apple butter from sticking.

If there's any debate about the rules, it circles the question of Red Hots. Yes, those Red Hots. Starting in the 1950s, many mountain families ingeniously used the old-timey hard cinnamon candy to spice up their apple butter when cinnamon sticks or powder were unavailable or too expensive. Honaker's grandfather, Ray, was a fan, and he used to sneak a small bag into the pot when no one was looking. "Someone still runs to Walgreens to get them, and we let the nieces and nephews put them in," Honaker says. "It's a thing."

Is apple butter made the traditional way really better than one from a slow cooker or a store-bought version? Jeremiah Langhorne, chef-owner of the Dabney in Washington, says "if you do Pepsi challenge, you can tell." Some of it, no doubt, is the romance, he explained. When you open the jar, you remember the smoke rising into the crisp fall air and the fun of catching up with friends. But the process - eight or more hours of stirring - also means that the apple butter stays at a rolling boil, a much higher temperature than it would in a slow cooker, so it produces a richer, more complex flavor.

The other big question - what exactly do you do with 100 or so jars of apple butter? - doesn't seem to trouble the families who make an annual batch. Stick it on a cheese plate, put it in marinades for chicken or pork, or spoon a giant dollop into the batter for apple cake. Or you really can't beat apple butter French toast. If you're a bourbon lover, a dab of apple butter sands the sharp edges of a classic Old Fashioned.

At the Turners' annual party, the menu does not include anything made with apple butter. For one thing, there generally isn't any left from the previous year by the time the party comes around again. "To be honest, I actually don't like apple butter much," Barry Turner says, cracking open a Bud Light with a smirk. "But it's a tradition. We don't even think about, 'Will we have the party this year?' We just do it."

Apple butter, while delicious, is typically labor-intensive, but this slow cooker version allows you to enjoy the spread with minimal hands-on time. Just peel, core and chop the apples, and the slow cooker will do the heavy lifting. Extra jars of this deeply flavorful spread make a thoughtful gift.

Storage: To put up apple butter long-term, ladle it into sterilized glass jars and follow the jar manufacturer's directions. Otherwise, ladle the butter into clean jars, cover and refrigerate for up to 8 weeks.

Place the apples in the slow cooker and cook, uncovered, on high for 1 hour.

Cover the slow cooker and cook on low for 8 to 10 hours. The apples will have lost at least a third of their volume and should break and crumble when you poke them with a fork. Taste and add the sugar, cinnamon, nutmeg, cardamom, salt and clove and stir well to combine.

Turn the heat back up to high, cover and cook for 1 hour more. Taste and adjust the spices, then puree the apples with an immersion or regular blender, or in a food processor to make a velvety smooth apple butter.

This is essentially a gussied-up applesauce cake with richer, more caramelly apple butter and a touch of peppery chai spice, which lends savory undertones. If you can find it, try Spicewalla's chai masala, but if you want to make your own, mix 4 parts ground ginger, 3 parts cinnamon, 2 parts ground cloves, 2 parts ground cardamom and 1 part freshly ground black pepper.

For a special occasion, you can top the cake with cream cheese frosting, but it's perfect on its own as an elegant, understated tea cake.

Storage: The cake can be stored at room temperature, tightly wrapped, for up to 4 days.

Where to Buy: Spicewalla chai masala is available online.

Cooking spray or unsalted butter, for greasing the pan

Preheat the oven to 350 degrees; position the rack in the middle. Grease a Bundt pan with cooking spray or butter, dust with flour and tap out excess.

In a medium bowl, sift together the flour, baking soda, salt and chai masala spice until combined.

In a large bowl, whisk the eggs with the sugar until combined; the mixture will lighten in color and look slightly sandy. Whisk in the apple butter, yogurt, oil and vanilla until combined.

Fold the dry ingredients into the wet ones, then gently mix in the walnuts, if using. Do not overmix.

Pour the batter into the pan and smooth out the top with a silicone spatula. Rap the pan on a hard surface to remove any air bubbles. Bake for about 40 minutes, or until a cake tester inserted into the center of the cake comes out clean.

Cool the cake for 15 minutes in the pan, then turn out onto a rack to cool completely.

A traditional Old-Fashioned doesn't require a shake, but to infuse the apple butter flavor, I've added a "dry shake" - without ice - in a cocktail shaker.

Add the bourbon, apple butter and bitters to an empty cocktail shaker. Shake for 20 to 30 seconds, then strain into a tumbler over one large or three small ice cubes. Garnish with an apple slice and serve right away.